On Thursday, an Islamist killed three people, nearly decapitating one at the Basilica of Notre Dame in Nice, France, while yelling “Allahu Akbar!” Two weeks ago, a teacher was nearly beheaded after he showed controversial cartoons of the prophet Muhammad in his class. The Associated Press decided this was a time to ask why France was causing this!  Their original “AP Explains” article was headlined “Why does France incite anger in the Muslim world?” Yes, “incite.” Then they softened it to “Why France sparks so much anger in the Muslim world.”

AP’s Halloween tweet with the “incite” phrasing was deleted:

Many countries, especially in the democratic West, champion freedom of expression and allow publications that lampoon Islam’s prophet. So why is France singled out for protests and calls for boycotts across the Muslim world, and so often the target of deadly violence from the extremist margins?

Its brutal colonial past, staunch secular policies and tough-talking president who is seen as insensitive toward the Muslim faith all play a role.

AP tried another tweet, though, to play down the “France incites” tone…even if it still carries the curious tone of “freedom of expression is dangerous.”

AP blamed French imperialism, and not immigration. That would sound too Trumpy.

France has the largest population of Muslims in Western Europe, more than 5 million in a nation of 67 million, a legacy of its colonial domination of large swaths of Africa and the Middle East.

But the country’s efforts to integrate Muslim immigrants have faltered. The official French doctrine of colorblindness is intended to ignore ethnic and religious backgrounds and to have all French citizens seen as equally French. In reality, the ideal often fuels discrimination against those who look, dress or pray differently from the historically Catholic majority, instead of preventing it.

“Historically Catholic” is kinda funny, since Charlton acknowledges that France established secularism in 1905, and “Crucifixes were at one point torn from classroom walls in France amid painful public debate.”

A century later, polls suggest France is among the least-religious countries in the world, with a minority attending services regularly. Secularism is broadly supported by those on both left and right.

As the number of Muslim in France grew, the state imposed secular rules on their practices. A 2004 banning Muslim headscarves and other ostentatious religious symbols in schools remains divisive, if not shocking to many outside France. A 2011 law banning face veils made Muslims feel stigmatized anew.

AP blamed French president Emmanuel Macron for being too bold in opposing violent extremists. Notice how Muslim radicals are merely “seen as” undermining religious freedom. Charlton even cited Turkey’s president Erdogan, who has squashed religious freedom for the Christians in his own country: 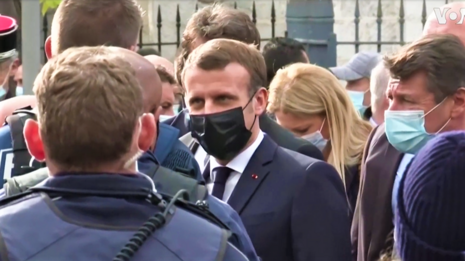 In the wake of recent extremist attacks, his government expelled Muslims accused of preaching intolerance and shut down groups seen as undermining French laws or norms.

The words the president uses have provoked outrage as well. He said the planned law was aimed at Islamist “separatism,” which raised fears of the further alienation of French Muslims.

At a memorial for a teacher beheaded for showing the prophet caricatures to his class, Macron gave a speech extolling tolerance, knowledge and religious freedom. But he drew ire, including from Turkey’s president, for saying, “We won’t renounce the caricatures” and that France should “diminish Islamists.”

On Sunday, AP was again demonstrating its fervent empathy for the victimized Muslims: “French Muslims, stigmatized by attacks, feel under pressure.”

Black Friday shopping in stores craters 52% during pandemic as e-commerce...

Black Friday shopping in stores craters 52% during pandemic as e-commerce...