A SLEEK GREY trimaran that cuts through the water at 27 knots, the Sea Hunter is capable of sailing from San Diego to Tokyo, and back again, on a single tank of diesel—all by itself. The ship is an “autonomous unmanned surface vehicle”—a fancy name for a sailing drone—operated by America’s navy. The air conditioning on board is for the benefit of computers, rather than humans. The design pays little heed to human comfort. “I’m on a ship that looks like a Klingon bird of prey,” remarked an official when visiting the ship in 2016. Earlier this month the Sea Hunter spent time with the USS Russell, a more traditional destroyer, practising “manned-unmanned teaming”. The idea is that such double acts are the future of naval warfare.

In a report published this month, the Pentagon acknowledged a grim milestone: China’s navy, having churned out warships like sausages, has become the world’s largest. America had held that crown since the second world war. Though America’s warships tend to be heftier than their Chinese counterparts, the total tonnage of warships launched by the PLA navy between 2015 and 2019 exceeded that of America over the same period by almost half, estimates Thomas Shugart, a former submarine officer (see chart). Mr Shugart notes that the last such dramatic and rapid naval build-up was Ronald Reagan’s drive for a 600-ship navy in the 1980s.

In a speech on September 16th, Mark Esper, America’s defence secretary, explained how he intended to solve the problem. The starting point was more ships, if not quite as many as Reagan envisaged. America now has 296. Mr Esper promised to expand the fleet to more than 355 (a figure mandated by Congress, and five more than China’s current tally). As a statement of intent, he pointed to the fact that in April the navy granted a $795m contract for the first in a new class of frigate (“It’s like a yacht with missiles on it,” was Donald Trump’s assessment), with the option to buy nine more for a total of $5.6bn. That was its first major new shipbuilding programme in more than a decade. 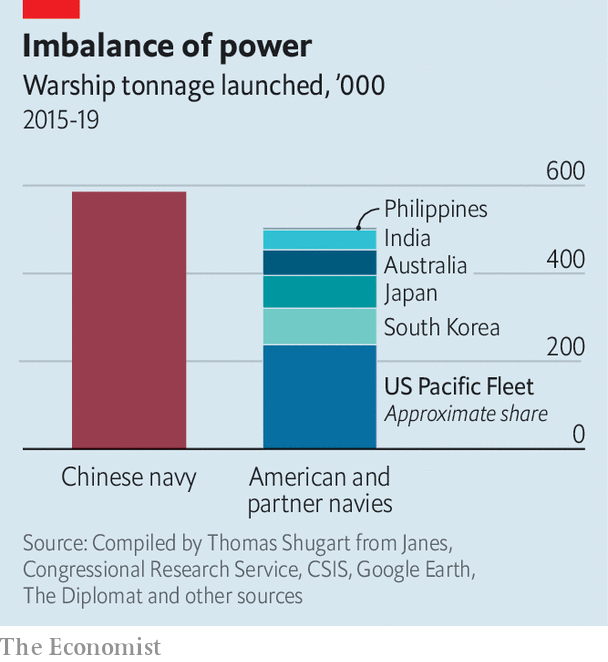 But fleet size is not everything. Though there would be more ships, said Mr Esper, they would have to be smaller and nimbler. The fleet would have to grow more “distributed”, in other words capable of spreading out more widely to survive China’s plenteous missiles, and attacking from a greater variety of positions. And the very nature of the ships would have to change. In the past, America’s shipbuilding targets have featured only traditional warships—complete with sailors. Mr Esper’s goal includes unmanned vessels like the Sea Hunter.

Sailor-less ships have the advantage of being smaller (and so harder to spot on radar), and cheaper to build and operate. They are also what military types call “attritable”, which means that in a war they could be sunk in large numbers without the backlash that would follow heavy human casualties. In its most recent budget request to Congress, America’s navy asked for around $580m for developing several varieties of unmanned (and “optionally manned”) ships.

Mr Esper said that unmanned ships would “perform a variety of warfighting functions”, including supplying other ships and laying mines, but also “delivering lethal fires”. That is controversial. An armed unmanned ship must be either remote-controlled, and therefore vulnerable to having its communications jammed, or entrusted with the authority to make life-and-death decisions on its own.

Some question whether this goes far enough. Mark Montgomery, a retired rear-admiral, points out that for all the talk of autonomous platforms, the navy’s next carrier-based fighter jet, the F/A–XX, which the navy will not start building until the 2030s, will continue to have a pilot. That bulks up its design and shortens its range (or reduces its payload). At present, less than 2% of navy aircraft are unmanned.

The other problem is money. In his prepared remarks, Mr Esper said that the shipbuilding budget would have to grow from 11% of the navy’s spending to 13%, “the same levels…committed during the Reagan era”. Perhaps in a fit of fiscal sobriety, those numbers were struck from the final speech because, the Pentagon explained, a decision had not yet been reached. Once built, just running a 355-ship navy would cost tens of billions of dollars more per year.

Congress is reluctant to provide fresh funds until the navy proves the utility of unmanned platforms. The new plans would therefore require raiding other bits of the navy’s budget, at a time when crewing ships is already hard. “If this administration survives,” tweets Bryan McGrath, a naval expert, “there will be no money to operate this fantasy fleet.”■

This article appeared in the United States section of the print edition under the headline “AI, Captain”

It seems Washington Football Team has chosen name for next season